Menu
Scroll to content
// Welcome to Oak Field School // Need this information in a different way or a paper copy? Get in touch on 0115 915 3265 or admin@oakfield.nottingham.sch.uk// Please see latest news for details of Covid reporting during school holidays

Some of our members have been with us right from the beginning while others have joined more recently. 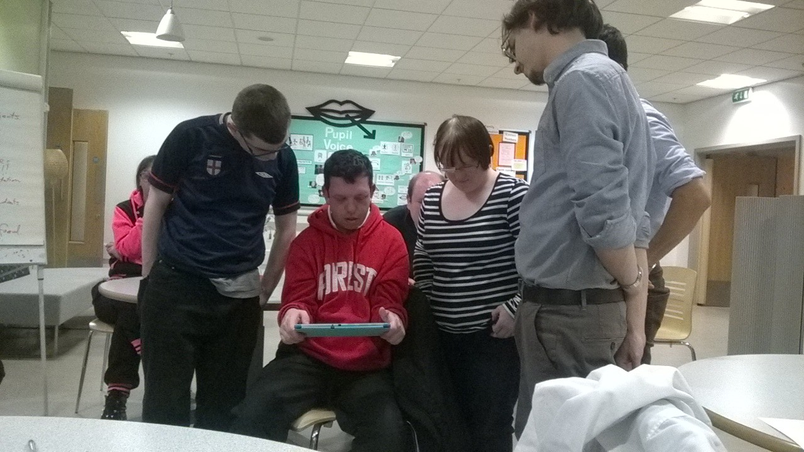 Here are some of our regular members:

Michelle has been in the group almost since the beginning. She helps with catering and keeps the register. She makes a good cup of tea. She has been to most of the conferences that the group has attended and particularly liked the one in the Millennium Dome. She likes learning about new things and the opportunity to get better at talking to people so she really enjoys the dissemination activities in which the group get involved.

Daniel G joined the group a few years after he left school. He enjoys coming to the user group because he meets friends there.  He has enjoyed advising on a proposal to design a Go Kart and any of the projects that involve the robots especially when they dance.

Leigh has been attending the group since the late nineties. He has attended conferences in Seattle, Sweden, South Africa, Maastricht, Dublin and Montpelier. He has contributed to just about all of the group’s presentations. He likes attending the group meetings and helped create Cheese Factory (a game that has proved widely popular).

Michael recently presented at CHI 2016 in San Jose California. He likes getting to know people and hearing about projects. His favourite conference is ITAG in Nottingham where he was interviewed two years ago by the BBC EM Today about one of the robot projects.

Dale has been in the user groups since he started school. While still at school he took part in the RECALL project and has helped both David Stewart and David Brown with conference presentations. He likes playing computer games.

Daniel B has been to lots of conferences including Montpelier and Maastricht. He helped to create Cheese Factory and to develop Route Mate, a mobile phone app to help route learning.

Emma has been part of the group for the last seven years. She is interested in the robot research, particularly working with the NAO robot. She has been to the ITAG conference at the Council House in Nottingham and helped with a group presentation.

David S Stewart OBE D.Litt.h.c. DL is the former headteacher of Oak Field School. He has been working with children and adults with learning disabilities for nearly 50 years and is a founder member of the NICER group. He continues to work with the school and both Universities in Nottingham. He has particular interest in the Arts and health education. In 2019 he had a tram named in his honour!

Penny is Professor in Health Psychology and Learning Disabilities at Nottingham University and is one of the original members of the group.

Andrew is a member of teaching team at Oak Field with a special interest in Computing. He is responsible for ordering the pizzas that we enjoy halfway through our meetings.

David J Brown is Professor of Interactive Systems for Social Inclusion at Nottingham Trent University. His research aims to harness enabling technologies to drive improvements in education, rehabilitation and mental wellbeing. He is very interested in the use of  virtual reality, robotics and affective computing for use by students with a learning disability and autism. He is a founding member of the NICER Group.